Russian President Vladimir Putin has ordered to prepare a terrorist attack at the Chernobyl nuclear power plant. A man-made catastrophe is planned to be organized at this Russian-controlled NPP in order to assign the blame for it on Ukraine.

This was reported on Facebook by the Defence Intelligence of Ukraine. According to the message, the Chernobyl nuclear power plant is currently completely de-energized and disconnected from the monitoring systems of the International Atomic Energy Agency (IAEA).

The intelligence noted the occupiers to provide no access of Ukrainian repairers to the plant. Instead, "Belarusian specialists" entered the site on the instructions of Putin's aide Alexander Lukashenko. Russian saboteurs are reported to come to the plant with them to organize a terrorist attack.

In addition, the Russian terrorists struck Zaporizhzhia nuclear power plant and Kharkov Institute of Physics and Technology (with experimental nuclear reactor on it) recently.

The invaders to imitate the involvement of the Ukrainian military in the planned Chernobyl accident. They are reportedly collecting the bodies of fallen Ukrainian defenders in Gostomel, Kyiv Region, to that end. They are likely to impersonate them as killed saboteurs in the Chernobyl zone.

"That is, Putin has achieved none of his goals due to the ground military operation and the direct talks and is now ready to resort a nuclear blackmail of the world community to get some concessions in support of Ukraine", the intelligence stressed.

The Defence Intelligence warned Putin's actions to have a catastrophic effect for the whole world. 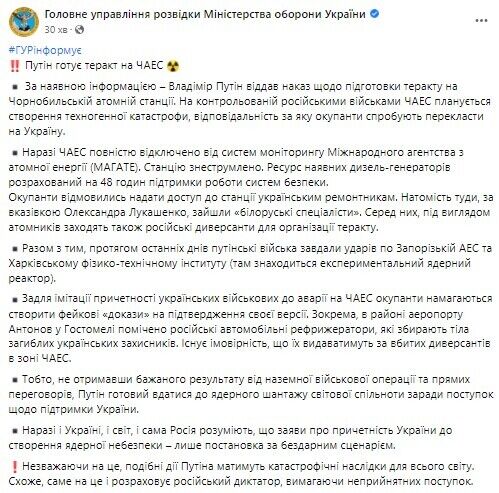