The evacuation from Luhansk region has been officially stopped. Rashists fired on evacuation transport, which was going to carry civilians out of the combat zone.

A French journalist, who's aim was to cover the evacuation, was killed during the shelling. This was announced by Serhii Haidai, Head of the Luhansk Regional Military Administration.

"Today our armored evacuation transport was going to pick up 10 people from the region and came under enemy fire. Shell fragments pierced the car's armor, an accredited French journalist, preparing a material about evacuation, was mortally wounded in the neck, a patrol policeman was saved by his helmet. We officially stop the evacuation", – Haidai noted. 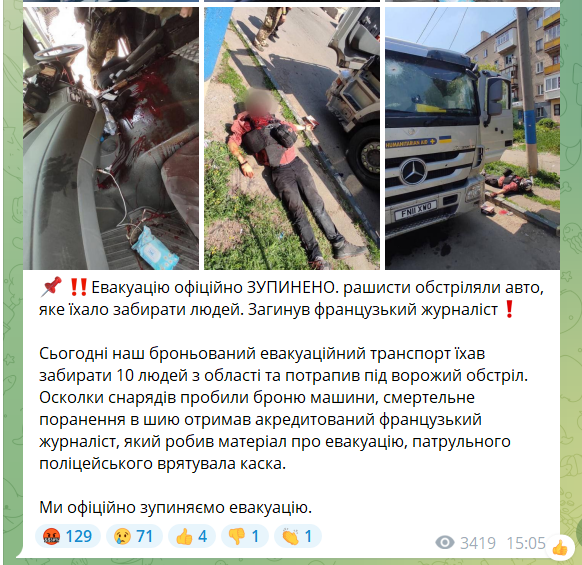 As it became known later, it was the reporter of the BFMTV channel Frederic Leclercq who was killed.

According to Anton Gerashchenko, the Adviser to the Minister of Internal Affairs, three people were injured.

Gerashchenko added that a police captain, who was with the group, got a shrapnel wound in the head.

"The body of a French journalist was evacuated to Bakhmut for further delivery to Dnipro for a forensic medical examination. The police captain taken to military hospital", – the Minister's Adviser said.

The Head of the Luhansk Regional Military Administration posted creepy photos with the consequences of another crime of the Russian invaders.

They show a bloodied car and the body of a deceased journalist who was killed by Moscow today. He tried to show the world the truth about what the Russian Federation is doing in Ukraine.